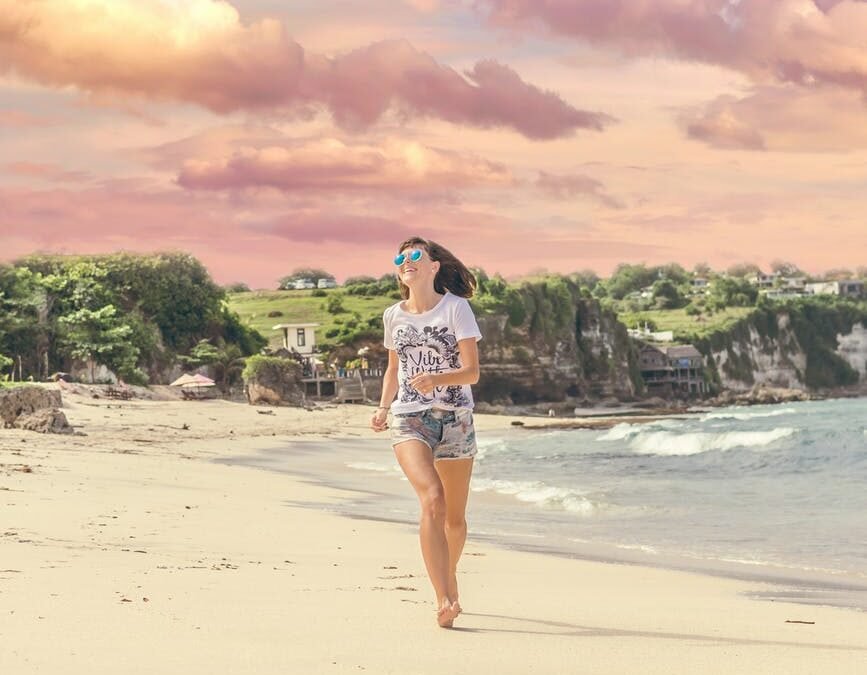 The National Association of Anorexia Nervosa and Associated Disorders estimates that 9% of the world’s population has an eating disorder.

Despite the lack of large-scale investigations, anecdotal evidence of these developments is strong.

A hero’s dose of magic mushrooms taught me I could let go of my eating problem once and for all, says Francesca Rose, an eating disorder recovery advocate. “It hit me: my eating disorder was not me. Not even mine. Everything clicked. My eating disorder was gone. Food or body control no longer made me feel safe or worthy.” This psychedelic-assisted transformation is part of what led her to add her current work; aiding other women with eating disorders on their healing journeys.

Many women still consider talking about insecurities taboo, weak, or shameful. Embedded experiences, including psychedelic ones, can help one heal. Rose also teaches yoga and conscious dance. Destroying stigmas through empowering women to speak up and reconnect with their bodies.

Women can reconnect with their bodies and create a softer relationship with themselves by intentionally using psychedelics. “An eating disorder is used unknowingly to feel protected in the world and give a feeling of meaning and identity,” Rose explains. The eating disorder is a strategy to mend the internal world, even if it is unsustainable. Psychedelic traveling and post-journey integration can help people reduce their reliance on eating disorders because they feel more at ease in the world and more internally whole. We can reconnect with our intrinsic values, belonging, dignity, and divinity. Psychedelics can help us feel proud and accepted, and we can experience love and connect to it.”

To comprehend these conditions, we must first understand body image. Most women don’t just like or dislike their bodies. Body image is a complicated mix of thoughts, ideas, and perceptions of how our bodies appear to us and others, what they can do, and their estimated size.

Body image concerns can develop at age 5. Puberty-induced physical changes might exacerbate discontent. Culture also shapes our self-perception. Gender, complexion and hair color, and many other factors might influence how people perceive their physical appearance.

This psychiatric illness causes people to overvalue minor flaws or even imagine flaws in their bodies. Difficulty accepting your own body image. It can cause eating disorders and social, professional, and personal concerns. Body dysmorphia and eating disorders affect both men and women. However, women are three times more likely to be affected.

Around 30 million Americans have an eating disorder, and 70 percent of these 30 million people are unaided. As a result, anorexia nervosa has one of the highest death rates among mental health illnesses at 5.9%.

Eating disorders are notoriously difficult to cure. Traditional treatments like CBT have a remission rate of around 45 percent, a return rate of about 30 percent within a year, and are difficult to track. Now, some professionals and researchers are looking at the benefits of psychedelic therapy as an alternative.

“Eating disorders generally develop as maladaptive coping techniques when internal resourcing is overwhelmed by life events,” explains Lauren Taus, a therapist in California who uses ketamine. According to Taus and other therapists interviewed for this piece, psychedelic treatment can relieve symptoms of certain disorders, such as sadness and anxiety, in ways that standard therapy cannot. It can reduce symptoms related to serotonergic signaling and cognitive inflexibility and induce beneficial brain states that may speed up therapeutic processes, according to Dr. Adele Lafrance in this EdCatalogue article.

“My encounter with empathogens has invited me to understand how much conflict was waging inside me,” Taus said. I observed my personal suffering and the pain of my family system. These psychedelics essentially invited me to process what was beneath the surface. I felt immense anguish, fury, and fear while also feeling deep love and compassion for myself and others. I could forgive my parents because I understood their decisions. Also, I found the will and strength to fight for myself and my life.”

So, what is it about psychedelics that allows for great epiphanies like Taus’? They can help the Default Mode Network (DMN), which conducts inter-brain communication. This area appears to be hyperactive in depression, anxiety, and OCD. Also, poor cognitive flexibility in anorexia nervosa patients may be linked to an overactive DMN. Studies such as “Rethinking Therapeutic Strategies for Anorexia Nervosa: Insights From Psychedelic Medicine and Animal Models” indicate that psychedelics lower the activity in this area and, by doing so, allow us to create new thought patterns, giving us a fresh perspective on life, the world, and ourselves.

Psychedelic psychotherapy can also assist a person in identifying the true basis of their frustration. According to a 2013 study, a patient’s resistance derives from the disorder’s “ego-syntonic” nature. Many of the disorder’s behaviors, feelings, and ideals are ego-syntonic. Psychedelic chemicals can enable a brief dissolution of the ego, providing the possibility of transformation, healing, and reform of specific habits, thought patterns, or addictions.

Taus explains that “traditional psychotherapy frequently stays in the sphere of cognition and intellect.” In treatment, a person may learn about their patterns but struggle to change them.” For example, a woman may realize that purging is unhealthy and causes humiliation. She may know precisely why and when it started, but she can’t stop. Psychoactive drugs can induce internalized and sustained behavioral change. The therapist’s role is to provide a safe space for exploration and a supportive relationship for people to make sense of their experiences and find meaning in them.

Psychedelics are not a cure-all and must be used in conjunction with psychotherapy and/or other therapeutic methods such as journaling and yoga. Women with eating problems and body dysmorphia benefit most from a holistic approach.

Most recent research on psychedelics for treating eating disorders has focused on ketamine, Ayahuasca, MDMA, and psilocybin. Let’s see how they can help with eating disorders:

Ketamine is a non-classical psychedelic that can temporarily alter consciousness. Severe depression, PTSD, and OCD have all been treated with this synthetic chemical.

Ketamine can be injected, given orally, or insufflated (blown into a body cavity, such as the nasal passages). Assume that everyone metabolizes drugs differently. Ketamine is recognized for its dissociative effects, such as slowing down time or separating you from reality, as observed in this study.

“The dissociative sensation of ketamine can translate into higher joy in embodied experience. Ketamine-Assisted Psychotherapy (KAP) helps eating disorders lose their grip on their belief systems. From a scientific standpoint, psychedelics break the default mode network, which affects self-image, memories, beliefs, and patterns.” says Taus. “The medicine allows the brain to be reorganized to promote healthy living. Ketamine also increases neuroplasticity, allowing for strong therapy treatment with clients 24–48 hours after a KAP encounter.

Dimethyltryptamine (DMT), one of the most influential psychedelic substances, is found in Ayahuasca, a fermented herbal drink. The brew has been a sacred ceremony by numerous South American Indigenous cultures for at least 1000 years. It causes mystical and profound visions that lead to self-discovery.

The first-ever study of Ayahuasca’s ability to help patients recuperate from eating disorders was released in 2017, co-led by Dr. Adele Lafrance and Dr. Kenneth Tupper. The majority of the patients in the study claimed that Ayahuasca helped minimize their eating disorder symptoms and showed them the fundamental cause of the disorder. Participants could distinguish between an eating problem purge and an ayahuasca purge for the brew’s purging effects.

The ayahuasca experience has the power to favorably impact behavior, stimulating self-reflection and heightened awareness. Studies suggest that drinking can benefit the treatment of anxiety, addictions, and depression, as well as eating disorders, by also changing body views.

MDMA, a synthetic molecule, affects people’s behavior by increasing receptivity. MDMA raises serotonin levels while also raising oxytocin, dopamine, and other chemical mediators, resulting in feelings of empathy, trust, and compassion. It also has a long-lasting effect on how people process trauma and emotions.

In clinical settings, MDMA is administered orally in capsules. The patient starts with a full dose (75-125 mg) and can add a second dose 2 hours later. An MDMA session usually lasts 6-8 hours.

MDMA induces an increase in prefrontal cortex activity, which is necessary for information processing, and a slowdown in the amygdala, the area of the brain that is key in processing memories and emotions related to fear. The primary therapeutic effect of MDMA is its potential to excite the brain, allowing it to develop and store new memories. PATIENTS BECOME MORE EMOTIONALLY FLEXIBLE AND CAPABLE OF EXPLORING DIFFICULT MEMORY

Psilocybin is a compound found in over 100 mushroom species worldwide. Psilocybin has the best safety profile of any psychedelic. The fungi may help treat eating disorders by addressing the brain’s serotonin imbalance and moving away from symptom-focused treatment. This may affect self-esteem and self-compassion.

Another benefit of psilocybin therapy is that it can effectively treat OCD, a typical symptom of eating disorders.

Psychedelics can help women recognize their eating disorders as a coping technique. Once they understand this, they can gradually replace negative habits with good, healthier, and kinder ones. They can change their inner story of lies and body-shaming beliefs.

In addition to other therapeutic methods and modalities, integration, connections, and a holistic approach must be emphasized. Change takes time, effort, and persistence, especially when deconditioning long-standing habits.

“Eating disorders and addiction are transformational experiences that carry enriching value,” Rose says when asked how long it takes for those changes to ultimately occur. Transform means to change or convert. Recovery is about allowing the behavior to alter and transform, taking us along for the ride so that our beliefs, feelings, thoughts, behavior, and action take on a new form. Ground-up, long-term reform takes time.”

“Recovery for me is about everyday, incremental personal and spiritual improvement. Eating disorders and addiction have taught me valuable lessons and made me more of who I am: alive, free, appreciative, and connected.

The positive outcomes we’re witnessing suggest that this is a worthy goal to pursue. Rose and Taus’ stories are only two of many other women who have had life-altering experiences from these substances.

“I no longer evaluate my body or try to master her,” says Taus. “My experiences with plant remedies have helped me see my body as a perfect part of nature, and I accept – even appreciate – the aspects of me I’ve historically struggled with.”

“Psychedelic-assisted therapy’s power is experiential,” she explains. We can reshape our lives and ourselves when knowledge meets with feeling and understanding.